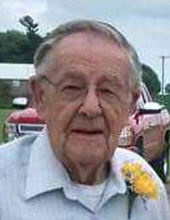 A celebration of life will be held on Saturday, February 23, 2019 at the Rockwell Community Center from 2:00-4:00 p.m. Inurnment will be at Rockwell Cemetery at a later date. Memorials can be directed to the family of Roger Hirsch.


Roger Franklin Hirsch was born on July 29, 1927 to Edward and Eliza (Greenzweig) Hirsch in Rockford, Iowa. He was the youngest of three children. He grew up in Charles City. On February 4, 1945, he was united into marriage to Helen Elaine Baldwin in Nashua and eight children were born into this union.

In his free time, Roger enjoyed going to the casino and playing cards and working as a bartender at the Legion. To his family, he was known to poke fun at them and make them laugh, and he always enjoyed a cigarette and socializing with his friends.

Roger is preceded in death by his wife, Helen; two sons, Randy Hirsch and an infant son, Dennis; his parents; and his brothers, Raymond Hirsch and Marvin Hirsch.

To send flowers to the family in memory of Roger F. Hirsch, please visit our flower store.