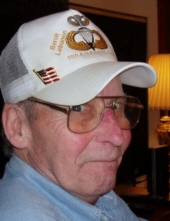 Memorial services will be held at 1:30 PM Wednesday, December 29, 2021 at Major Erickson Funeral Home with Pastor Debra Devine officiating. Military honors will be conducted by the Mason City Veterans Association. Inurnment will follow in the Elmwood-St. Joseph Cemetery columbarium. Visitation will be held one hour prior to service time on Wednesday.

Roger was born September 30, 1938 the son of Fred and Elsie Gabel in Mason City, IA.

Roger graduated from Mason City High School in 1956. After graduation Roger enlisted in the U.S. Army 11th & 82nd airborne serving as a master paratrooper stationed n Germany, Denmark, and Beirut. Roger was very proud to serve his country and loved sharing his military stories with his family.

October 7, 1961 Roger was united in marriage to Theresa Werstein in Sioux Falls, SD. To this union 3 children were born, Tina, Michele and Adam. Roger retired from Holcim Cement in 2000.

Roger enjoyed fishing, watching the Vikings and Hawkeyes play, his yearly bet with his brother and best friend Clark on who would win the Super Bowl. Roger was very artistic and created many paintings and drawings he shared with friends and family. Most of all Roger enjoyed his time with his children, Theresa and family.

Those who shared in Roger’s love include his daughters, Tina Abendroth, Michele (Todd) Borchardt, son Adam Gabel; grandchildren, Danielle and Dillon; great-granddaughter Adalyn; brothers, Clark (Geri), Richard and Alvin; sisters, Joyce (Don) Allen and Darlene Johnson; many nieces, nephews and Barb Schaefer who was thought of as one of his children.

Roger was preceded in death by the love of his life Theresa, son in law Steve Abendroth, and his parents.

The family would like to thank Dr. Boedeker and his staff for their care and compassion and Darlene Johnson for all of her help and love in caring for Roger while he was at home.

To send flowers to the family in memory of Roger D. Gabel, please visit our flower store.