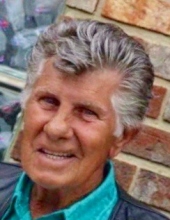 Roger A. Berding of Plymouth, Iowa passed away March 17, 2019 at the age of 67 years old. After 4 years of battling cancer, Roger passed away peacefully in his home surrounded by his children Chad (Teisha), Carrie (Brian), Kim and Ricky (Amy).

Roger was born on March 18, 1951 in Grafton, Iowa to John Berding and Alberta (Everhart) Berding. Roger was one of fourteen children: Darlene, Herman (Bud), Lavonne, Larry, Bonnie, Roy, Shirley, Benny, Beverly, Rainy, John (BD), Dale, and Darrell (Butch). Roger attended school in Grafton, Iowa where he met his future wife and mother of his children. Roger married Sharon Crawford on October 5, 1975 at the Plymouth Methodist Church. Roger and Sharon dreamed of providing a farm life for their children as Roger had as a child. In July 1996 they made this dream come true and purchased “The Ranch” on the out skirts of Plymouth – which later Roger was able to build his dream home. Roger and Sharon had four kids (Chad, Carrie, Kim, and Ricky) who became their whole world.

Chad married Teisha (Miles) in May 2017. Chad enjoyed working alongside his father fixing fence, roofing homes and learning the trade of construction. Chad and Roger shared many characteristics such as walking, talking, and work ethic. Brooke, child of Chad, spent many days feeding cattle, jumping on hay bales, fixing fences, riding on the tractor and four- wheeler with Grandpa Roger. One of Brooke’s favorite memories with Grandpa was fishing at Devil’s Lake reeling in “the big one”. Over the past four months Teisha, who Roger often referred to as “his nurse”, had the opportunity to care for Roger there were many 4:00 a.m. coffee breaks, one minute oatmeal’s, and runs to BK for Strawberry Shakes. During this time Teisha concluded that Roger and her husband were two peas in a pod – when she was talking to Roger she felt like she was talking to Chad which led her to understand her husband much more. Chad owns Rock Central LLC from Plymouth and Teisha is a fulltime student and CNA at Mercy Medical Center. When they think back to Roger’s life they smile and think about the good times on the farm as a family.

Carrie Berding and Brian McPhail enjoyed living next door to Roger on his farm and were almost always together. Roger built their home with pride and to perfection. Roger always said you kids can have anything in life you want, life is what you make it. Roger worked hard for everything he had and taught his kids to do the same. Roger and Carrie had a very special bond that was unbreakable. Roger was not only a father to Carrie he was her rock, her best friend and her everything. Roger always made sure his kids had the best of everything, putting them before himself always. When Carrie looks back on her Father’s life she knows how tough life is going to be without him, not just for her but her family. Roger will be missed by Family, friends and his animals cats, dog and cows that meant so much to Roger.


Kim Berding and Matt McCoy enjoyed spending Sundays with Roger. Kim spent many days working alongside her father, teaching her the trade of construction and plumbing. One of Roger and Kim’s latest projects was spent remodeling her new purple bathroom. Roger’s last projects was building Kim’s garage in the summer of 2018. Roger had great cooking abilities which Kim learned from hours spent in the kitchen together. The last year of Roger’s life Kim and Roger spent many days “working” aka napping together. Oftentimes Kim was referred to as the driver for Rogers treatments and the mediator between Roger and Carrie. In Kim’s eyes “my dad was my rock, my best friend, he never let me down”. Kim enjoyed learning how to operate the backhoe and skid loader with her dad. Kim and Carrie were often known as Daddy’s girls. Roger and Kim were very similar they often thought the same in many aspects. When Kim thinks back to Roger’s life she smiles and thinks of all the fishing trips to Devils Lake and working alongside him on different jobsites.

Ricky and Amy (Knudsen) married in September 2013. Ricky and Roger could be found drinking BV cloudies and Captain Morgans while fishing on Devils Lake. One of Ricky and Amy’s fondest memories was when Roger lived with them for 6 months which lead to many early morning conversations about broken picture frames. Karter and Kooper, sons of Ricky and Amy, spent many days with their “Bucka” Roger feeding the cows and driving the skid loader. One of Roger’s favorite things to do with his “little buddies” was to snuggle up and take naps. Karter and Bucka spent many summer Sundays fishing. When Ricky and Amy think back to Roger’s life they smile and think of all the Sunday spent in the garden digging up the billions of potatoes “POTATO, POTATO”!

Roger was very close to his family especially John (BD) and Butch often farming and working on construction projects together. They weren’t just brothers, they were best friends. They were very loyal to one another.

Roger was a young entrepreneur; Roger had a passion for hard work and construction which lead him to start a family construction company, with his brothers, which continues to this day. Roger shared his passion for construction with his kids by bringing them to work. Roger continued his passion for construction throughout his entire life alongside his brothers. Roger worked as a Plumber in the Local 33 Union and retired in 2005. He graduated with his Journeymen’s license January 11, 1988. When Roger was not working you find him at Jakes Place or Rock Falls Lounge enjoying a BV cloudy with his brothers, putting together family cookouts or dancing to George Jones. If you could not find Roger you only had to look for Sparky (the dog) and you know you would find Roger – they were inseparable. Roger took great pride in his white van, which was used to take many family trips and used to go to the Cancer Treatment Centers of America in Zion, Illinois.

Roger cherished many memories with loved ones: dancing, deer hunting, at fish fry’s, family reunions, fishing trips, taking the kids to Chuck and Wanda Wulf’s Cabin, riding in the backhoe with Sparky (his dog) One of Roger’s favorite things to do was being a practical jokester, nicknaming everyone Clark even naming Carrie’s dog Clark. Roger cherished every moment of farming weather it was helping Meacham’s at their cattle farm – spreading manure, driving combine, bailing hay, or tending his own – Roger was a true cattleman and had a passion for construction and plumbing.

The family would like to send a special thank you to The Cancer Treatment Center of America Dr. Pisick, Aric Bloom, Dr. Schmidt, Dr. Raza Khan, Dr. Vashi and many kind nurses. Mercy Cancer Center of Mason City with Dr. Lousie Cragg, Dr. Orcutt and Dr. Adams and many kind staff for all their guidance and patience throughout the past years. Doctors and nurses at these facilities often became very fond of Roger and his feisty personality often saying ‘’ hurry up he had to catch a plane’’– the family will be forever grateful for all the laughs and support they received. And thankful for Hospice Dr. Jayawardena, Todd, Stacy and Barb for the amazing care. And a special thanks to Scott Graham with Major Erickson Funeral Home & Crematory.

The kids will be having a Celebration of Roger’s life on Saturday April 13th at noon at “The Ranch” 103 Broad Street Mason City Iowa.

To send flowers to the family in memory of Roger Allen Berding, please visit our flower store.