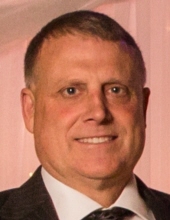 Memorials may be directed to the family of Robin Faught.

Robin Dale Faught was born on April 17, 1963 in Osage, Iowa to parents Roger and Donna (King) Faught. He graduated from North Central High School in 1981. After graduation, Robin obtained an Associate’s Degree in 1983 from North Iowa Area Community College. Robin was united into marriage to Mary Schutt on November 4, 1995. To this union, 3 children were born: Stephanie, Ryan, and Eric Faught.

Robin purchased land and acreage in Manly, IA, in 1997, where he farmed. He then moved to Clear Lake, and he worked for the City of Mason City. He first started in the Swing Department, taking on any sanitation route that had an opening. Then he transitioned to a heavy equipment operator and worked in the parks and recreation department. Along with his full-time job; he worked consistently for the past 30 years as part-time farm help for Tom and Georgia Ashland. While living in Clear Lake, Robin transformed a field to a farm operation and an amazing home for his family.

Robin would never shy away from a conversation and was quick to interject a business deal; mostly to live out his dream to buy antique gold just like on the TV show, American Pickers. He was always a gift giver and tried to light up the recipients face with his creative presents.

Robin was known for his bright green shirts and his morning can of Diet Mountain Dew; he lived up to the clique of work hard, play hard. Few men worked as hard as Robin Faught; he’d use a combination of self-taught tactics and will his way to complete any project that he encountered. One of the biggest conversations pieces was his three children; whether it was a sports activity, 4-H projects, or any such accomplishment, Robin always found a way to highlight the joy his children brought him. There was never a challenge that Robin wouldn’t face; he wanted the very best out of everyone around him, never settling for just good enough. Family always came first, and no one was going to get in the way of providing for the future. Robin was an amazing husband, father, son, brother, and friend and he will be greatly missed by the many that knew him and loved him dearly.

Robin was preceded in death by his grandparents, Audrey and Dorothy Faught, Clifford and Doris King, Irvin and Anna Schutt, and Urban and Wilma Mohr; uncles, David Faught and Gary Faught; and cousins, Deb Faught and Nathan Quail.

To send flowers to the family in memory of Robin D. Faught, please visit our flower store.