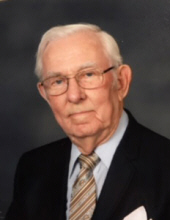 Inurnment will take place in the First Congregational United Church of Christ Columbarium.

Memorials may be made to the First Congregational United Church of Christ.

Bob and Ardyth Hamilton moved to Mason City in 1951. They were faithful members of the First Congregational Church where Bob served as treasurer, sang in the church choir and presented numerous vocal solos for worship. Bob worked as a wholesale lumber distributor from his home office.

Bob was President of the Mason City Country Club in 1968. He won the Mason City Amateur Club Golf Championship in 1969. Bob, Ardyth and Paul moved to La Quinta, California in 1974. Bob lived there until Ardyth passed awat in 2003. Bob moved back to Mason City in 2005 and lived at the Willows Retirement Village for several years.

He was preceded in death by his parents; his wife, Ardyth; his daughter, Sarah Hepperly; son, Scott Hamilton; a grandson, Kevin Hepperly; and four brothers and sisters.

To send flowers to the family in memory of Robert W. Hamilton, please visit our flower store.