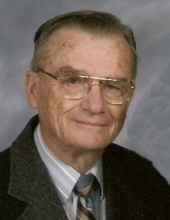 
Robert S. Pedelty III was born on December 12, 1926 in Mason City to parents Robert S. II and Bessie Fern (Swift) Pedelty. Bob grew up in and attended Mason City High School graduating in 1945. Following his graduation, he attended Ruppert School of Auctioneering in Decauter, IN. Bob would continue on to operate the Clear Lake Auction Company and later the North Iowa Livestock Exchange, he also ran the family farm south east of Mason City for more than 50 years. Bob was united in marriage to Harriet Doyle at the St Patrick Catholic Church in Clear Lake on June 22, 1948.

He was preceded in death by his wife: Harriet Pedelty; parents: Robert S. II and Fern Pedelty.

To send flowers to the family in memory of Robert S Pedelty III, please visit our flower store.