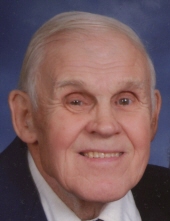 Interment will be held in the Elmwood – St. Joseph Cemetery.

Memorials can be directed to the family of Robert Wilson.

Robert Wilson was born December 29, 1930 at Clarion, IA and was the oldest son of Ray E. and Blanche Flurer Wilson. Bob attended Clarion schools graduating form high school in 1948. He attended and graduated from Iowa State College in 1953. He was captain on the wrestling team at Iowa State when they were Big 8 Champs.

He married Mary Ann Elder at Mason City, August 10, 1952. After college graduation he was with the Agricultural Extension Service at Garner, IA for 1 year. He was in the US Army from Sept 1954 to April 1956. Since 1956 Bob and Mary lived on a farm west of Mason City. Mr. Wilson taught science in Clear Lake for 5 years and then moved to Monroe Junior High School as a science teacher and finished his last two years taught at John Adams Junior High School when he retired to their farm. Mr. Wilson got his M.S. in science from UNI in 1966.

Mr. Wilson with his wife and boys raised and exhibited purebred Suffolk sheep for many years. Dynamo was the ram that went undefeated in his career in the show ring as a ram lamb and yearling ram and was State Fair Champion in 1968. Bob and Mary shared duties as Secretary-Treasure of Iowa Suffolk Sheep Association for 22 years. He was an assistant leader in Boy Scouts.

Bob was a member of Faith Baptist Church where he was deacon and taught Sunday school to the Adult classes. He was also active in 4-H serving as sheep project leader. He was a member of the North Iowa Fair board (35 years) and served as sheep superintendent. He enjoyed his time judging sheep shows throughout the Midwest.

Left to cherish his memory are his wife Mary Ann, his two sons Mark and his wife Molly, Scott and his wife Robin. Seven grandchildren; Jill, Joan, Jennifer, Aaron, Austin, Thad and Alicia and five great grandchildren, Noah, Luther, Fiona, Violet and Ava. Robert has two brothers Arnold and Maurice and their wives. The family has many nieces and nephews.

To send flowers to the family in memory of Robert Fred Wilson, please visit our flower store.