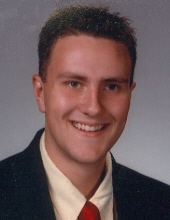 Robert was born October 19, 1979 to parents Gary and Mary (Turk) Hanson in Mason City where he attended Mason City schools and graduated in 1998. Robert went on to graduate from the University of Iowa in 2003 with a Bachelor’s Degree in Economics and a Minor in Business Administration. He worked in the mortgage industry as a consumer loan advisor living in Las Vegas and then in Arizona until illness hospitalized him. Bob was baptized into the Lutheran faith at Bethlehem Lutheran Church in Mason City on December 2, 1979 and confirmed May 1, 1994 and it was this faith that sustained him through his illness and hospitalization.

Bob was a vivacious person, eager to make friends, and always ready with a smile for everyone. Bob loved the outdoors, whether it was playing Little League baseball, Mason City club hockey, or hunting waterfowl, pheasants and turkeys with his father, uncles, cousins and friends. But his true love was golf. Bob was on the high school golf team and could be seen on the local golf courses, spending many hours enjoying the game and playing “nine” with his golf buddies.

Robert was preceded in death by his mother Mary, grandparents Duane and Ruth Hanson, Robert and Ella Turk, uncle Robert Turk all of Mason City.

To send flowers to the family in memory of Robert Carl Hanson, please visit our flower store.