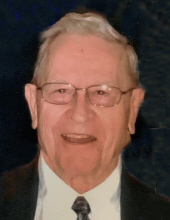 Memorial services will be held at 1:00 PM, Tuesday, December 10, 2019 at the First United Methodist Church, 119 S. Georgia. There will be no visitation. Inurnment services will take place at a later date.

Memorials may be directed to Hospice of North Iowa or First United Methodist Church.

Bob was born on Dec 13, 1927, to George and Ione (Schramling) Marolf in Cedar Rapids, Iowa. He graduated from Mason City High School in 1945. Bob enlisted in the Navy in 1946, with hopes of serving his country while traveling around the world. The Navy had other plans. Bob was stationed inland at a hospital in Georgia. While at Georgia, Bob pursued his passion for flying, flying numerous planes and receiving a pilot’s license from the Georgia Aviation School. After Navy service was complete, Bob attended Drake University in Des Moines, Iowa, graduating with a law degree. Bob started a flying club at Drake, The Flying Bulldogs, to share his passion with his friends.

Bob was married to Vernice K. Eshelman on June 6, 1954 in Fontanelle, Iowa by Vernice's father who was a Methodist minister. Vernice was a “looker”, but she also had a great personality and intellect. Bob did well. Bob and Vernice lived in Des Moines where Bob was employed at Preferred Risk Insurance. In 1965, Bob and Vernice moved to Mason City, where he eventually opened his own law firm in Manly, Iowa.

Bob was very active in volunteer work around Mason City and Manly. He was one of the original founders and served as president of the Mason City Foundation. He was a board member on the Murphy Foundation; an active volunteer with Wright on the Park; and worked diligently to help purchase and restore the Meredith Wilson house. He was also a dedicated member of First United Methodist Church.

He was preceded in death by his parents; wife, Vernice; and three brothers George Jr., Ron and Roger.

Bob is survived by his children, Kathy, Kristin and favorite son, Mike (okay, only son). In addition, Bob is survived by nine grandchildren and three great grandchildren. His family is thankful that he is pain free, lived an incredibly full life, was a great role model and is now happy in the company of those who preceded him in death. We love you, Pop! You were a great husband, father, grandfather, great-grandfather and friend. You will be greatly missed!

To send flowers to the family in memory of Robert "Bob" J. Marolf, please visit our flower store.