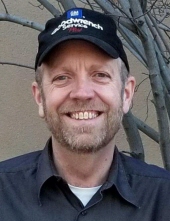 Robert “Bob” Burns, 57, of Clear Lake, IA was released from the bonds of this earth on Monday, October 12, 2020 and was taken to his eternal home in heaven where he was united with his Lord & Savior Jesus Christ.

Bob was born on February 9, 1963 in Ottumwa, IA to Bob and Joy Burns. He grew up in Iowa with his siblings Ginny, Vicki and Randy.

On March 6, 1981 the life of Bob was forever changed as he was married to his beloved wife Martha and he had the privilege of spending the next 36 years sharing his life with her. Bob was always captivated by Martha’s smile and her gentle & loving heart. He then had the privilege and honor of adopting his daughters, Jennifer and Shannon.

Bob often joked that he was educated by the “school of life”. He held many jobs through the years including driving for Plagge Truck Lines in Mason City, IA and then he worked at Financial Freedom Controls in Mason City, IA. He then worked in the financial services industry, later opening Burns Financial Services with his wife Martha. After Martha’s passing in December of 2017, he went back to driving truck and most recently drove for R J Wegner Trucking.

Bob enjoyed spending time with his family. He enjoyed camping, riding his motorcycles and snowmobiles, and just going on drives with Martha. He was a wonderful singer, often sharing his talent during church services, nursing homes, and private events. He loved driving truck and taking his dachshund Emmy along while he drove over the road.

Bob was a member of the Clear Lake Regular Baptist Church where he served faithfully.

Bob was preceded in death by beloved wife Martha, his parents Bob and Joy Burns, his mother-in-law Patricia Burke, and grandson Jordan McKibben.

Memorial donations may be made to Cancer Treatment Center of America or MercyOne North Iowa Hospice.

To send flowers to the family in memory of Robert "Bob" Burns, please visit our flower store.