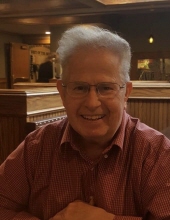 A visitation will take place one hour prior to the service time on Saturday. Memorials can be made out to the family of Robert Mitchell.

Bob Mitchell was born on February 12, 1940 in Carlinville, Illinois. He was raised by his parents Jesse and Arlene Ward in Woodward, Iowa. Bob Graduated from Woodward High School in 1958. He joined the US Navy and was trained as an electrician. On November 1, 1969 Bob married Shirley Lorene Wearda. Bob and Shirley made their home in Mason City Iowa. From his first marriage, Bob had one daughter, Julie Ann. Bob and Shirley had two more daughters, Sheri Lynn and Stacie Jo. Bob worked for Peterson Electric Motor Service in Mason City until he retired in 2006.

Bob spent his life working hard and playing hard too. He enjoyed camping, snowmobiling, grilling and working in his spotless garage with his beloved tools. He loved spending time with his family and many friends. He will always be remembered for his quick wit, sense of humor, sarcasm and love of a good time. Bob was always willing to help others and is known for being able to fix almost anything and would do anything for his family and friends.

Bob was preceded in death by his parents, Jesse and Arlene Ward.

To send flowers to the family in memory of Robert Allen Mitchell, please visit our flower store.