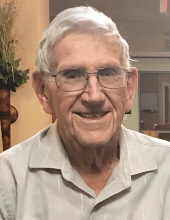 He was born at home on October 27,1930, in rural North Dakota to parents Henry and Annie (Antje Bultema) Smith. Richard graduated from Sutton High School. Following the onset of the Korean War, he enlisted into the Navy. He served as a Communications Technician on Adak and the Yokohama, Japan Navy base. He was a life member of the VFW.

After discharge, he attended Brown Institute in Minneapolis where he met his wife Doris Harbour. They were married August 20, 1955, at the First Presbyterian Church in Maynard MN. He worked for several small radio and television stations, Control Data Corp., and WCCO TV. He and Doris purchased and operated the Tyler Tribute newspaper in Tyler MN from 1976-1978. They moved to Mason City in 1978 and following a short stint as a free-lance broadcast engineer he joined the Mercy Hospital Building Services department. He retired as Building Services Manager in 1996. He continued to volunteer at the hospital following retirement.

Richard was an active ham radio operator for many years. He repaired TVs as a hobby and favor to many. He developed a passion for home computers, installing one of the first automated weather and advertising systems in Tyler. In retirement, Richard and Doris traveled countless miles in their 5th wheel trailer. They had a blast volunteering over seven years at multiple parks, wildlife refuges, and historical sites from Texas to Alaska and Oregon. They also spent several winters as snowbirds in their Arizona home.

Richard was an avid reader. He served as a Deacon and usher for First Presbyterian Church and, after moving to Mason City’s Village Cooperative, he served on the Co-op property committee and enjoyed cards and coffee with friends. His playful spirit captured the attention of many, including his grandchildren whom he nicknamed ‘Floyd’, ‘Clyde’ and ‘Henrietta’.

Richard is survived by his wife of 65+ years, son Terrance (Lonnie Zanton) Smith and their son Jonah; and son David (Sandra Meyer), and their children Connor and Sierra; his sisters Pat Rickford and Jan (Leander) Walen; sisters-in-law Elaine Smith and Mavis Keilen; brother-in-law Robert Christiansen and many nieces and nephews.

To send flowers to the family in memory of Richard Lee Smith, please visit our flower store.