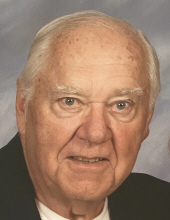 A funeral mass will be held 10:30 A.M., Friday, July 17, 2020 at Epiphany Parish – St. Joseph Catholic Church, 302 5th St SE, Mason City with Rev. Fr. Neil Manternach officiating. Social distancing guidelines will be followed at the church and a face covering is required. The service will be livestreamed on the Major Erickson Funeral Home Facebook page. Burial will be at Elmwood – St. Joseph Cemetery.

Visitation will be held from 4:00 to 6:00 P.M., Thursday at Major Erickson Funeral Home, 111 N. Pennsylvania Ave., Mason City. Those in attendance at the visitation will be asked to follow social distancing guidelines and to please wear a face covering.

Memorials may be directed to Epiphany Parish or MercyOne North Iowa Hospice.

.Richard “Dick” F. Wagner, the son of Fredrick and Ethel (Schubert) Wagner, was born September 16, 1934 in Mason City. He grew up in Mason City where he attended high school graduating in 1952. Dick served his country in the U.S. Army in the military police in Japan. In January of 1958 he was honorably discharged and returned home to attend Mason City Junior College. On August 16, 1958 he married Nadine Troge at St. Joseph Catholic Church in Mason City. After leaving the service, Dick worked with his father, Fred at Wagner Coal and Window Company. In 1962, he purchased the business from his father and later created Mason City Overhead Door with a partner. In 1968, he closed the coal business and was then offered a chance to buy the roofing company, Mid-West Roofing in Mason City. In 1988, he sold the business and retired in December, 1989. Dick always liked to keep busy and had several part-time jobs in his retirement including driving a hearse for funerals, delivering flowers and newspapers, and picking up used cars for local dealers. Dick also contributed his time to his community. He was a past president of the Mason City Chamber of Commerce and served many years on the Mercy Hospital board of trustees and finance committee.

While his work life was important to him, Dick also enjoyed home life and leisure. With tailgates at Iowa Hawkeye football games, where he was head chef, fishing trips to Canada and tracking results for the PPPP Football Club, he approached everything with gusto and commitment. He took great pride in having a spotless car and a manicured lawn, and he loved putting on a show when entertaining, whether it was cooking brats for the roofing company, or Spanish coffee for God’s Portion day. But most of all, he enjoyed being with and helping his family. He loved to brag about his children and grandchildren, but most of all, he loved his wife and “roommate”, Nadine.

He was preceded in death by his parents and brothers in law, Norman Troge and Ronald Sturms.

To send flowers to the family in memory of Richard "Dick" Wagner, please visit our flower store.