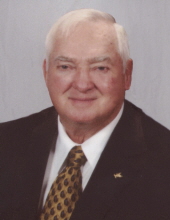 Richard “Dick” W. Rasmuson, 85, of Mason City, passed away on Friday, August 23, 2019, at MercyOne Hospice Inpatient Unit in Mason City. A funeral service will be held on Tuesday, August 27, 2019 at 10:30 a.m., at Wesley United Methodist Church, 1405 South Pennsylvania, with Pastor Craig Lutrell officiating. Visitation will be on Monday, August 26, 2019, at Major Erickson Funeral Home, 111 North Pennsylvania Ave., from 5:00 p.m. - 7:00 p.m. Interment will be at Elmwood – St. Joseph Cemetery. Memorials may be directed to Wesley United Methodist Church, MercyOne Hospice of North Iowa, or to the family of Richard Rasmuson.

On August 5, 1934, Dick was born on a farm near Britt, IA to Lloyd and Helen (Formanek) Rasmuson. He graduated from Britt High School in 1952. He also attended night classes at NIACC in the early 1960’s.

Dick started working for Northwestern Bell Telephone Company in December, 1952 and later AT & T, for 34 years retiring in 1986. He was then engaged in farming until the fall of 2018 northeast of Britt. Dick served in the U.S. Army March of 1957 until March of 1959. On December 9, 1956 he married Kathleen Wood at the Methodist Church, Woden, IA and together they raised four children.

Dick enjoyed fishing, boating, hunting, bowling, square dancing, camping and traveling. He and Kathy visited all 50 states, Canada, Mexico and Puerto Rico. They enjoyed going to Harlingen, TX during the wintertime for the past 20 years in their RV.

He was preceded in death by his parents, sister, Carol Pierce; and nephew Timothy Pierce.

To send flowers to the family in memory of Richard "Dick" W. Rasmuson, please visit our flower store.