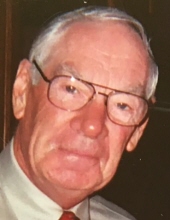 Dick was born on May 6, 1929 in Titonka, Iowa to Homer and Ethel Downs. He graduated from Titonka High School in 1947 and from the University of Northern Iowa, where he earned his Bachelor of Science Degree in education, in 1951. He then served in the United States Air Force from 1951-1955. After the Air Force, he began to work on his Master's Degree at the College of Puget Sound, where he met his future wife, Agnes. They married July 21, 1956 and moved to Iowa. While working as a teacher, Dick spent several summers taking classes at the University of Iowa and, in 1969, earned his Masters of Arts Degree in Counseling. Dick started his dedicated career in education as a high school biology teacher and taught driver's education in West Liberty for 4 years. He taught in Cedar Rapids and later moved to Mason City where he was a principal of Wilson Elementary, Director of Pupil Personnel Services, Special Education Director, and later a High School Counselor at Mason City High School where he retired. After retirement, he and Agnes moved to Sun City West where they have resided for 22 years.

Dick loved to watch and read about magic. He even tried a few magic tricks in his life. Dick was a woodworker and used his talent to refinish antique furniture, as well as make many items for family and friends. He was also an active athlete throughout his life. In high school he played baseball and basketball. After meeting his wife, he learned to play tennis and was an avid player until he was well into his 60’s. After retirement he spent more time golfing than playing tennis and, like many golfers, was never happy with his golf game. While living in Sun City West, AZ he played in a senior softball league. He played the position of pitcher in the senior softball league until he was 87 years old. He also loved to ride his bike and enjoyed many RAGBRAI trips across Iowa with friends and family. He and his wife loved to travel and spent many summers in Utah. The highlight of their traveling was to see family in Colorado, Idaho, and Iowa. Richard always enjoyed sitting around talking with friends and family.

Dick was a loving husband, father, grandfather, son, brother, uncle, and friend. He will be dearly missed by all of his family and friends. He is survived by his wife of 60+ years, Agnes Downs and their 4 children; Susan Downs of Davenport, Iowa, Linda Downs and her partner Jim Junker of Manly, Iowa; Karen (Downs) and Dan Tallman of Bettendorf, Iowa, and Bruce and Kristen (Reiber) Downs of Portland, Oregon. Six grandchildren: Lydia, Gavin, Colin, and Liam Downs, and Jacob and Tabitha Tallman. A brother, Robert and wife Nancy Downs of Oelwein, Iowa along with numerous nieces and nephews. He was preceded in death by his parents, Homer and Ethel Downs.

A special thank you to Hospice and Dina’s Assisted Living Group Home for the wonderful care they provided to him in his final days.

To send flowers to the family in memory of Richard "Dick" Kay Downs, please visit our flower store.