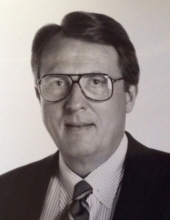 Richard was born May 16, 1934 to Frederic and Helen (Winterton) Morel in Shabbona, Il. After Graduation from Sandwich High School in 1952, he attended and graduated from the Elgin Watchmaking School.

He married Kathryn Beaver in Aurora, Il in 1954. In 1956 they moved to Mason City, IA to work at BOE Jewelry which they the purchased in 1957, changing the name to Morel Jewelers. They raised their family of five children in Mason City while they built their business. Dick continued his knowledge and education in the jewelry industry, becoming a skilled diamond setter, a Graduate Gemologist through the Gemological Institute of America, and a Certified Gemologist through the American Gem Society.

Dick traveled the world establishing direct diamond buying relationships from the source. These contacts reached from Antwerp, Belgium to the Kimberly Mines of Africa. He and Kathy also traveled to Asia and Europe to gain additional insights into the industry. They expanded to five Morel Jewelry stores in Mason City, Minneapolis, and Winona MN.

Dick was in demand as a speaker across the nation and at national conventions for the jewelry industry. He was a Vice President of the Retail Jewelers of America. Locally, he was a member of the Toastmasters, Masonic Lodge, and Kiwanis where he served a term as Lt. Gov. As a member of the Mason City Chamber of Commerce he was active in promoting the Southbridge Mall. He was a previous owner of the Frank Lloyd Wright Hotel in Mason City.

Dick lived life with high energy, full of quick wit, laughter and on his terms.

The family wishes to extend their deepest thanks for the excellent loving care at the IOOF Home. Their compassion, devotion and support to our father has lessened this difficult journey through dementia.

To send flowers to the family in memory of Richard (Dick) Jule Morel, please visit our flower store.