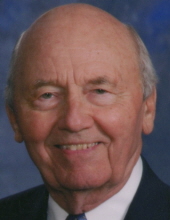 Interment will be in Elmwood St. Joseph Cemetery. Visitation will be from 4:00 to 6:00 PM Friday at Major Erickson Funeral Home, 111 N. Pennsylvania. Masks are required and social distancing guidelines will be followed.

Memorials may be directed to Trinity Lutheran Church where a scholarship will be established in his name.

Dick was born November 25, 1929 in Roland, Iowa the son of Archibald and Vernita (Riis) Erickson. Growing up in Roland, Dick learned at a young age a strong work ethic. From mowing the Roland Cemetery and Erickson Park, assisting the school janitor cleaning black boards, toilets and floors and helping his dad in the furniture store and funeral home. Dick graduated from Roland High School in 1948 where he participated in baseball, basketball and other school activities. Giving up a sports scholarship, Dick enlisted in US Marine Corp. Following boot camp, he was sent to Hawaii where he was stationed at Pearl Harbor for 2 1/2 years. While on leave, he met Marion Charlson of Lake Mills who was teaching in the Roland School System. Dick and Marion were married June 28,1953 in Lake Mills. Soon after their wedding they drove to St. Louis, Missouri where Dick would attend and later graduate from the St. Louis College of Mortuary Science. Dick served his Class A apprenticeship in Dows under his father who had purchased the funeral home. In Dows, Dick not only worked as a funeral director but also as a custodian at the Lutheran church and for a local construction contractor. On September 1st, 1959, Dick and Marion moved to Mason City after purchasing the Major Funeral Home from Harvey B. Major. In 1964, he applied for a patent to secure a casket spray, floral piece, to the casket. He incorporated the new spray holder company as Emeny Corporation of Mason City and to date has sold well over 1 million spray holders. Dick would continue to own and operate Major Erickson Funeral Home before selling the business to son Bob in 1990. Following “retirement”, he remained active in the business, helping when needed, while spending 23 winters in Sun City West, Arizona. Dick and Marion also enjoyed 30 summers at their lake home in Clear Lake on the south shore near Dodges Point.

Serving the community was important to Dick and some of the organizations he was involved with included, President and Vice President of Trinity Lutheran Church as well as numerous church boards, Board of Regents at Waldorf College, KCMR Radio Board of Directors, Good Shepherd Health Center, Mason City Chamber of Commerce, Mason City Lions Club, American Cancer Society, Mason City YMCA and Harding Lodge #649.

The family would like to give a special thanks to Hospice of North Iowa, VA Central Iowa Mason City and the home health care aids who cared for Dick at home.

Dick was preceded in death by his parents; brother-in-law, Loren Sampson and brother and sister-in-law, Ron (Pam) Charlson.

To send flowers to the family in memory of Richard D. Erickson, please visit our flower store.