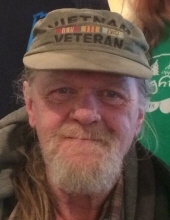 Richard D. Brass, 65, of Forest City, died Friday July 27, 2018 at his home. Memorial services will be held at 10:30 AM Thursday, August 2, 2018 at the Major Erickson Funeral Home, 111 North Pennsylvania Ave., Mason City, IA. Inurnment will follow in the Memorial Park Cemetery. Visitation will be held Wednesday, August 1, 2018 from 4 until 7 pm at the funeral home.

Richard was born July 25, 1953 the son of John and Lucille (Lamb) Brass in Hampton, Iowa. Following graduation Richard enlisted in the United States Air Force on December 13, 1972 in Des Moines, Iowa. He was first stationed in Little Rock AFB, Arkansas where he became an aircraft frame repair specialist. He was then transferred to the Philippians where his duties included being flown into Vietnam to work on downed aircraft. Richard was very proud of his service to his country. He was honorably discharged December 2, 1976.

Over the years Richard worked at a farm hand, construction and was employed at Winnebago Industries for several years. His passion for turning a wrench was evident in his love of working on cars. Richard loved a good game of pool and enjoyed eating his favorite foods, tacos and nice steak. In his free time he savored his time with his grandchildren.

Mr. Brass was preceded in death by his parents, an infant son, Jeffrey; step-father and two brothers in law.

To send flowers to the family in memory of Richard D. Brass, please visit our flower store.