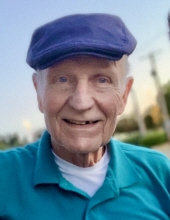 Richard A. Gabel, 79, of Mason City, IA passed away Saturday, March 12, 2022 at the Good Shepherd Health Center. Funeral services will be held at 10:30 AM Saturday, March 19, 2022 at Trinity Lutheran Church, with Pastor Kathy Graves officiating. Visitation will be held one hour prior to the service. Interment will follow at Elmwood-St. Joseph Cemetery. Military honors will be conducted by the Mason City Veterans Association.

Richard was born February 19, 1943 the son of Fred and Elsie (Anderson) Gabel in Columbus Junction, IA. After graduating from Mason City High School, Richard enlisted in the United States Air Force serving his country in Vietnam until his honorable discharge.

Richard spent many hours writing music, singing and playing his guitar. For several years he served in the jail ministry at the King County Jail in Seattle, WA., lead worship at several churches he attended, and lead numerous bible studies. He enjoyed art and drawing pictures that emphasized his Christian beliefs. He loved being outdoors fishing for salmon in the Puget Sound, or lake fishing for trout and bass. He was also an avid bowler and bowled on many leagues.

For Richard, showing love to others was his life’s purpose. Faith allows God’s Spirt to grow character within us and Richard's passion for this life changing transformation inspired him to hand-write his own copy of the Bible. Richard was always willing to help anyone, and was very generous with his time and talents. He enjoyed delivering treats to all, and more than anything wanted to be friends with everyone. Richard was always up for a good joke whether he was hearing it or telling it.

Richard was preceded in death by his parents and brother Roger Gabel.

To send flowers to the family in memory of Richard A. Gabel, please visit our flower store.