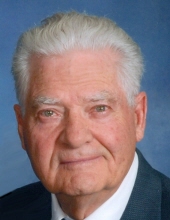 DuWayne was born on July 25, 1933, in Montevideo, MN, the son of Clarence and Celeste Dalen. DuWayne was a graduate of Montevideo High School and continued his education at South Dakota State University where he received a Bachelor's degree in Electrical Engineering. The Lord led DuWayne on a different path and he attended Luther Theological Seminary in St. Paul, MN, where he graduated with a Master of Divinity. DuWayne served congregations in California, Arizona, Minnesota, and Iowa. He also served a 3-year missionary call to Brazil. He touched many people's lives through his 57-year ministry.

DuWayne was a devoted husband, loving father, grandfather, and great-grandfather. He loved to travel, hunt, fish, take trips to the Boundary Waters, spend time at his lake cabin in Minnesota, and attend his grandchildren's events.

He was preceded in death by his parents; brothers, Carlyle and Donald Dalen; and daughter, Joyce Nelson.

DuWayne will be laid to rest at Immanuel Lutheran Church, Montevideo, MN at a later date. Memorial donations may be made to Lutheran World Relief.

To send flowers to the family in memory of Rev. DuWayne Russell Dalen, please visit our flower store.