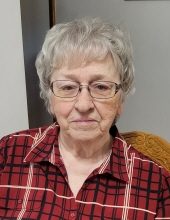 Burial will follow immediately after the service at Riverside Cemetery in Rockford, Iowa. Visitation will be held on Wednesday, May 18, 2022, from 4-6 p.m., at Major Erickson Funeral Home, 111 North Pennsylvania Ave., Mason City, with a Rosary beginning at 5:30.

Visitation will also be one hour prior to the services at Holy Name Catholic Church on Thursday.

Memorials may be directed to Remelda Gelner Memorial Fund in care of her family.

Remelda was a member of Holy Name Catholic Church of Rockford, Iowa.

Remelda was born May 2, 1934, the daughter of John and Emma (Werner) Snopek of Manly, Iowa. She attended rural grade school and graduated from Manly High School in 1951. Remelda was united in marriage to Robert Eugene Gelner of Forest City, Iowa, August 7, 1954, at Sacred Heart Catholic Church in Manly, Iowa; with this union, they were blessed with 5 children. The Gelners farmed for several years, prior to settling in Rudd, Iowa in 1963. Remelda was a stay-at-home mom where she loved caring for her children and children of others. Later in years, Remelda was employed as a student aide and cook at Rudd Elementary School and then a dietary cook for Liberty Square in Nora Springs, Iowa. Remelda always enjoyed working outdoors, gardening and canning the bounty, cooking tasty meals, home decorating, reading a good novel, yard sales and great bargains. Remelda relished family and friends’ get togethers, family picnics, family rituals, card playing, Christmas bingo and she was the absolute best at helping others! She loved time spent with her children, grandchildren and great-grandchildren and was known to many as “Grandma Truck”. Remelda’s firm belief, there is no better place on Earth than farm living! Remelda is so loved and will be dearly missed by all those she leaves behind. We have an unbelievable amount of memories and stories to share with generations to come.

To send flowers to the family in memory of Remelda A. Gelner, please visit our flower store.