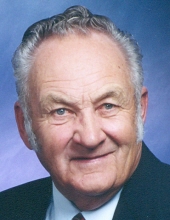 A funeral service will be held Tuesday, August 7, 2018, at 10:30 AM, at Hanford Community Church, 12411 Spruce Avenue, Mason City, with Pastor Dan Carlson officiating.

Raymond Walter Scott was born April 23, 1925, on his grandparent’s farm, to parents Walter and Hattie (Diercks) Scott. Ray grew up on a farm in rural Mason City. He attended a country school for 8 years and attended Mason City High School for 1 year. On December 3, 1943, he was united in marriage to Ruth Patton in a house in Rockwell, Iowa. Ray started farming on rented farm land and had his own team of horses. In 1964 he bought his grandparents farm and worked the land for 50 years; while also working at American Crystal Sugar during the fall seasons. After he retired from farming he took up metal recycling going to auctions to buy metal to be recycled and resold. Ray enjoyed playing cards, some of his favorite games being cribbage and 500. Together he and his friends won a few cribbage tournaments. He loved to polka dance; and square dance, he and Ruth were members of a square-dancing club.

Raymond was a very active and devoted member of the Hanford Community Church, attending and supporting the church was something that was very important to him. Ray was very devoted to his family and cherished spending time with all of them.

To send flowers to the family in memory of Raymond Walter Scott, please visit our flower store.