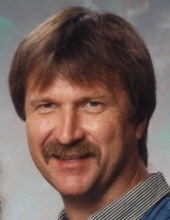 Inurnment will be in Memorial Park Cemetery, with a luncheon following committal service. Memorials can be made out to the family of Randy Carolus.

Randy was born in Clear Lake, on February 9, 1957 to Merwin and Ardy (Pinneke) Carolus. He had one brother, Rick. He graduated from Mason City High School in 1975. In 1978, Randy married Mildred Abrams and together they share one son, Raul. Randy was employed at Winnebago for a short time, as well as being self-employed at Home Siding. More recently, he was a fork lift operator at Crescent Park Distribution. In his free time, Randy loved to fish, especially for Walleye. He also liked to spend time with his grandchildren, and the rest of his family.

Randy is preceded in death by his mother, Ardy; one nephew, Ryan Abrams; and father-in-law, Lloyd Abrams, Jr.

To send flowers to the family in memory of Randy M. Carolus, please visit our flower store.