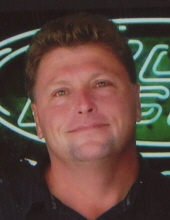 Memorials may be directed to the family of Randy Miller.

Randy Gene Miller was born on February 27, 1963 in Sweet Springs, Missouri to parents Dean and Norma (Ogaard) He lived in Missouri until he was two years old, and in 1965, he moved to Mason City. In his early life, Randy enjoyed playing trumpet in band, and he taught Sunday School. Randy graduated from Mason City High School in 1981.

After high school, Randy worked at Sperry/Unisys at several years, until he started his own business, Miller Tree and Landscape. Randy was an incredibly hard worker, and very motivated to do his job correctly and efficiently, and he instilled that work ethic into his children.

Randy was united into marriage to Jennifer Russell on December 14, 2020 in Mason City after being together for 12 years.

When Randy wasn’t working, in his free time he loved riding Harley’s; he enjoyed taking trips to Sturgis as often as he could. He also enjoyed camping, grilling, socializing with friends, and collecting antiques. Randy’s life focused on the most important thing: his children. He loved being a father and later, a grandfather. Randy was an amazing man and he will forever be missed by many.

Randy was preceded in death by his parents, Dean and Norma Miller.

To send flowers to the family in memory of Randy G. Miller, please visit our flower store.