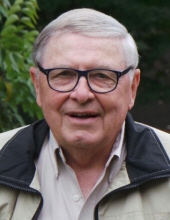 Raleigh was born April 8, 1943 the son of Stanley R. and Lola A. (Moore) King in their home at the top of the sledding hill at East Park in Mason City, IA. He attended Mason City Community Schools and later graduated in the class of 1961. On February 23, 1964 Raleigh was united in marriage to Carolyn Quam at Trinity Lutheran Church in Mason City, to this union two children were born. In 1980, Raleigh started his own business called Dyna-Kleen.

Raleigh was an avid bowler, over time he bowled a 300, picked up the 7/10 split and was inducted into the Mason City Bowling Association Hall of Fame. He was also known to be a pretty good golfer, scoring a hole in one after many rounds played. Many young people knew Raleigh as “Coach”, he coached Mason City Little League for many years earning several city championships. Raleigh always made time to fish and spend time at the cabin relaxing with family and friends. He was a member of the Lunker Club and he and Carolyn took many fishing trips to Canada with the other members. Raleigh was always up for playing cards and especially enjoyed playing cribbage. He enjoyed watching the Minnesota Vikings and the Iowa Hawkeyes. Raleigh was most proud of his family, and never passed up an opportunity to brag about any of them. Raleigh loved his wife Carolyn and has missed her dearly.

Raleigh was preceded in death by his parents, wife, Carolyn; and his dad, Jeroald Rasmussen.

To send flowers to the family in memory of Raleigh S. King, please visit our flower store.