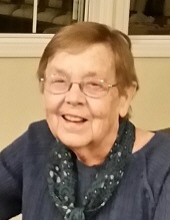 Phyllis was born February 26, 1932 to Lambert and Ruth (Meinders) Menke in Mason City, Iowa. She attended Mason City High School and graduated with the Class of 1950. She was married on October 2, 1954 to her high school sweetheart Roderick Wright and they raised their family in Mason City. She stayed home until her children were older and then worked in a variety of jobs in the community.

She was a devoted mother and loyal friend. She especially loved her grandchildren and great grandchildren. Phyllis was always open for a trip and adventure. From visiting family in Arizona to traveling by bus to Washington DC or by car with her family to North Carolina she wanted to experience it all.

She was a lifelong member of St Paul Lutheran Church and was active in the Altar Guild and Women of the ELCA. She enjoyed working with the quilting ladies and especially sharing a cup of coffee and conversation on Wednesday mornings.

In 1982 she took a quilting class at NIACC and thus began her love of quilting. She created many beautiful quilts that were shared with family, friends and as donations to local organizations. She was a member of the North Iowa Quilt Guild and enjoyed learning new patterns, traveling to quilt shows and displaying her creations at the local shows. She also quilted at the Senior Center on Tuesday mornings.

Phyllis was preceded in death by her husband of 50 years Roderick Wright, her parents, sister Adeline Perry, brother Junior (Bud) Menke and her grandson Matthew Murphy.

To send flowers to the family in memory of Phyllis Ruth Wright, please visit our flower store.