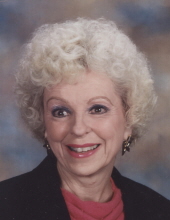 Memorials may be directed to the Phyllis Oetken memorial fund in care of the family.

Phyllis was born on June 17, 1931 to Philip and Mae (Cole) Hendrikson in Albert Lea, Minnesota. She grew up on the family farm northeast of Northwood, Iowa and loved spending time outdoors with her dad milking cows, caring for the pets, and doing farm chores. She attended Deer Creek Country School a mile from her home, and graduated from Northwood High School in 1949.

Phyllis met her future husband, Armand at an eighth grade softball game in Northwood. After graduation, they were married at Deer Creek Valley Lutheran Church, rural Glenville, Minnesota. The young couple moved to California next, as Armand had enlisted in the Air Force. They resided for two years at the Air Force base in Sacramento. They returned to Iowa in 1954 with their infant son, Terry and moved into the family farm home in rural Northwood. Phyllis pursued her goal to be an elementary teacher. She attended Mason City Junior College. She also received her B.S. and M.S. degrees from Drake University plus an Elementary Administrator Certification from Iowa State University.

Phyllis taught for 45 years. She taught in Geneva (1 year), Carpenter (4 years), Lyle, MN (1 year), and Mason City (39 years). During that time, she taught piano students as well as her elementary students, and taught many adult graduate classes for Drake University. Phyllis was a leader in education. She was a past president of the Mason City Education Association. She received the first Charles F. Martin Award in 1972, which is ISEA’s top honor to a member who has made a significant contribution to the teaching profession. She was nominated by the Mason City School District for the Iowa Teacher of the Year in 1981. She received the Women’s Achievement Award sponsored by the Globe Gazette in 1977 and 1981.

Over the years, Phyllis made a positive difference in many children’s lives. She was also dedicated to her family. Her joys in life were spending time with her mother and dad, husband Armand, son Terry, daughter-in-law Sue, and seeing her two beloved granddaughters Sherri and Kati grow up. Phyllis hosted many family gatherings, birthday parties, and holiday celebrations. She was a beautiful singer, and shared music with her family. She led the choir in her country church for many years before building a home in Mason City with her husband Armand in 1968 and joining Trinity Lutheran Church.

She was preceded in death by her husband, Armand; her parents, Mae and Philip Hendrikson; Armand’s parents, Fred and Helena Oetken; sister-in-law, Bette Jorgenson; and nephews, Brian and Barry Wilde.

To send flowers to the family in memory of Phyllis Mae Oetken, please visit our flower store.