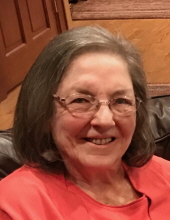 A visitation will be held from 4 until 6 PM Friday, November 29, 2019 at the Major Erickson Funeral Home, 111 North Pennsylvania Ave.

Phyllis G. (Deal) Mulkey was born in Hayden, Colorado on October 31, 1940, to William F. and Arta H. Deal, and grew up in Craig, Colorado. The youngest of three children, she attended Moffat County schools and was very active in many school and community-related activities. As a child, she loved collecting dolls, dancing, ice-skating, spending time with friends, family, and designing/making various forms of artwork. She hated going to summer camp and having her feet tickled.

Phyllis was married to Bruce Mulkey in October 1957, and the couple lived in a student housing Quonset hut in Fort Collins, Colorado, where both Bruce and Phyllis attended Colorado State University. Following graduation from college, Bruce embarked on a career in the Air Force and during those years, the family, now including three sons, lived in Hawaii, Virginia, Pennsylvania, and Nebraska. The marriage ended in 1978, but Bruce and Phyllis are fortunate to have maintained a friendly relationship over the years. Phyllis returned to college in 1976, and completed her education at Bellevue University with a double major in Psychology and Sociology and a GPA of 3.92.

During her lifetime, Phyllis has proven herself to be talented, tolerant, and very adaptable to drastic life changes. She has accomplished a number of different capabilities, through various jobs through the years, starting with bussing dishes in a restaurant (learned to properly set a table). She was a soda jerk in an old fashioned drugstore soda fountain (mostly learned how to sneak free malts to football players), sold lingerie and cosmetics (no comment), participated in many little league sports volunteer activities (learned organization, negotiation, leadership and team skills), worked as a nurse aide then a social worker in a nursing home (learned compassion, patience and care giving), served as a chemical dependency counselor (learned tough love), was a Sheriff’s deputy for 9 years, achieving the rank of Corporal (used all previous skills, became firearms-proficient, plus gained a few street smarts) and held several different positions within the Department, earning the Mike Elman Award (Officer of the Year) in 1989. She then served as the Director of the SWI Juvenile Detention Center for 4 years (also used previous skills, plus gaining a great feeling of accomplishment). In 1996, Phyllis decided, at the encouragement of family members, to move to Mason City, Iowa, where she was fortunate to get a job as the Decategorization Project Coordinator, and subsequently as a grant writer for various community service agencies until retirement. She thoroughly enjoyed her extensive community contact and involvement during her Mason City years. Phyllis became a well-rounded individual throughout her life, she would say mostly by accident and serendipity. Although her work experience was important to her, the greatest joy of her life has been being mother to her three sons, and subsequently Mother-in-law, Grandma, and Great Grandma to some very talented and special people. There are no words to express the love, pride, and precious memories she holds in her heart.

What an action-packed and blessed life journey!

Phyllis is survived by her three sons, Kent (Christine), Mark (Judy), and Darren (Kathie), along with grandchildren, Matthew (Andrea), Jessica, Tyler, Brett (Alexis), Ryan, Dan, Kimi, Corrinne, and Brayden, great granddaughters Olivia and Isabelle, and Sister-in-law Virginia Deal, along with nieces and nephews, several loved children from other mothers, grand-dogs, Husker, Penelope, Griffin, Mikey, and Skye, and grand-kitties Boo and Cinnamon. Mention must also be made of her surviving life-long companion, Puris, may his spirit of love and silliness live on.

Phyllis was preceded in death by her parents, “Doc” and Arta, brothers John, and Stan, and adopted cousins/sisters Connie (Wallace) Dawe and Louise (Wallace) Wetzel. Also waiting for her in heaven are dearly loved dogs, Eric, Sara, Hunter, Sophie, Riley, Crystal and Hans.

In lieu of memorial gifts, it is requested that those family and friends who wish to do so, do a kind act for another person.

To send flowers to the family in memory of Phyllis G. Mulkey, please visit our flower store.