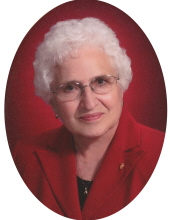 Phyllis was born November 22, 1935 in Mason City to Elmer and Irma (Falcon) Thrams. The youngest of 4 daughters. She was a 1953 graduate of Clear Lake High School. On March 7, 1954 Phyllis was united in marriage to Luwarren (Bud) Luick. To this union 3 children were born. Bud and Phyllis farmed in the rural Mason City area for over 40 years. Phyllis’s most cherished calling was being a devoted farm wife, helpmate and mother. As grandchildren and great grandchildren began to arrive she whole heartedly embraced that role as well. She held several part-time jobs through the years as her children were growing up, eventually earning a position as a Data Entry Supervisor at Park Clinic. After her retirement she and Bud logged many miles in search of just the right horse or Golden Retriever dog to purchase. They also enjoyed camping and wintering in Arizona until Bud’s passing in December of 2006. Phyllis always felt spending time with her family was a special blessing and serving her family delicious lovingly prepared holiday meals always brought a special joy to her heart.

The family would like to express their deep gratitude for the wonderful care given to Phyllis by the staff at Good Shepherd. We will always be indebted to you for caring for our Mom with such care and compassion, when we were unable to. Thank You!

To send flowers to the family in memory of Phyllis A. Luick, please visit our flower store.