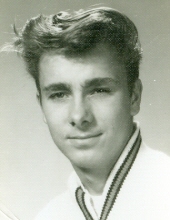 Funeral services will be held at 11:00 AM on Monday, April 23, 2018, at Trinity Lutheran Church, 213 N Pennsylvania with Pastor Kathy Graves officiating.

Visitation will be held one and a half hours prior to the service time at the church. Interment will take place in Elmwood St.-Joseph Cemetery. Memorials may be directed to the family of Peter Despenas.

Peter John Despenas was born December 25, 1944 in Mason City to parents Chris and Susan (Jackson) Despenas. Peter was united in marriage to Denise (VonBank) in Northwood, together the two spent 40 years together. He served his country by joining the United States Navy; serving 2 tours in Vietnam as a Signal Man. After the Navy Peter became an iron worker being a part of the union taking part in all of the steps in order to construct a building. Wherever there was a building to be built you could find Peter there.
Those who knew Peter will remember him as a kind-hearted person who had a passion for fixing things, playing the guitar, watching golf, cheering on the Minnesota Vikings and spending time with his children and grandchildren.
Peter is survived by his wife: Denise; children: Chris (Janie) Despenas of Hampton, Virginia, David (Trixie) Despenas of Elk Horn, Iowa, Becky (Scott) Brant of San Antonio, Texas; 11 grandchildren; 5 great grandchildren; 4 brothers and 4 sisters.
He was preceded in death by his parents.

To send flowers to the family in memory of Peter John Despenas, please visit our flower store.