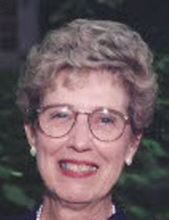 Priscilla (Penny) Binns Anderson, 95, formerly of Mason City, IA, died Saturday, September 10, 2022, at Oak Terrace Assisted Living Center in Mankato. A memorial service will be held at 11 a.m. on Thursday, September 15, 2022, at First Presbyterian Church, 100 S Pierce St. Visitation will be held one hour prior to the service time. A private family burial will be held in Memorial Park Cemetery. In lieu of flowers, memorials may be directed to Friends of the Mason City Public Library.

Penny was born in a farm house in rural Jackson County, Iowa, on December 6, 1926, the daughter of G. Edward and Emma Ketchum Binns. She attended a one-room schoolhouse at West Iron Hill, then Maquoketa High School, graduating in 1944. She then attended the University of Iowa.

On August 15, 1947, she married Henry (Hank) W. Anderson in Maquoketa, Iowa. They spent the first year of their marriage attending the University of Iowa for Hank to earn teaching certification and for Penny to complete her B.A. degree.

Penny moved with her husband to Independence, Iowa, in 1948 and worked for a time in the office of a law firm there. Later she became secretary for the Superintendent of Schools, resigning to start a family. When their youngest child started kindergarten, Penny returned to college, commuting to the University of Northern Iowa for two years for teaching certification in Library Science.

In 1969 she moved with her family to Mason City, becoming the junior-senior high school librarian in the North Central Schools, Manly, Iowa. She retired after 20 years in 1989.

After retirement, she and Hank would spend part of the winter in Destin, Florida. There they enjoyed walks on the beach, daily rounds of golf, and a glass of wine at sunset with friends. In addition, Penny spent many years as a docent at The Stockman House.

She was a member of Chapter LB PEO, Woman’s Club, Friends of the Mason City Public Library, and Mason City Country Club. She was also a member of the First Presbyterian Church, where she served as Deacon. Penny enjoyed playing golf and, in spite of her rather unorthodox golf swing, she was able to claim the rare honor of getting a hole-in-one. In addition, she was the 9-Hole Ladies Club Champion at the Country Club. Penny also enjoyed playing bridge, and when younger enjoyed collecting and refinishing antiques, caning chairs, and knitting and sewing.

She was preceded in death by her parents, her husband, and her sister.

To send flowers to the family in memory of Penny J. Anderson, please visit our flower store.