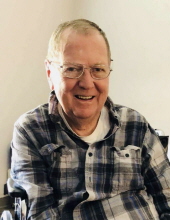 Patrick J. Fitzgerald, 80, formerly of Mason City, passed away peacefully in his sleep on Sunday, April 4, 2021 at the Calvin Community Retirement Home in Des Moines.

Inurnment will be held at a later date in Elmwood – St. Joseph Cemetery.

Memorials may be directed to the family of Patrick Fitzgerald.

Patrick John Fitzgerald was born on April 26, 1940, in Rockwell to parents Lawrence and Hazel (Gaffney) Fitzgerald. Patrick attended Sacred Heart High School in Rockwell and graduated in 1957. He then attended Loras College before joining the United States Airforce on June 6, 1960. While a member of the Air Force he was stationed all across the United States and in Puerto Rico. He was Honorably Discharged in 1964.

Patrick was united in marriage to Mavis Anderson in May of 1963, and they lived in Mason City. In March of 1965 Patrick began working for Natural Gas in Omaha. Following his time there he began working for Southwestern Telephone Company and did so for over 20 years retiring in 1991. After his retirement he began working part time for Budweiser and he also renovated homes.

Patrick was an avid fisherman, gardener, golfer, photographer and enjoyed taxidermy. Patrick was well liked and will be missed by many.

He was preceded in death by his parents, Lawrence and Hazel; infant child, Robert Fitzgerald.

To send flowers to the family in memory of Patrick J. Fitzgerald, please visit our flower store.