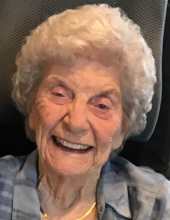 The family wishes to invite everyone to join them online in saying their goodbyes and celebrating the life of Patricia Haensch.

Inurnment will be held in Elmwood – St. Joseph Cemetery at a later date. Memorials may be directed to the family of Patricia Haensch or Mercy One Hospice.
Patricia was born May 9, 1923, in Blue Earth, MN, to Leo and Agnes Whalen. Her family moved to Mason city, Iowa where she attended and graduated from Holy Family School in 1941. After graduating and during World War II, Patricia worked as a telephone operator. When WWII ended, the love of her life, James Haensch, returned home from his WWII military service and they got married June 27, 1945. They celebrated 61 years of marriage until Jim passed away in 2003.

In addition to being a wife and mother, Pat also worked in the office for Jacob E Decker & Sons, and as a sales associate for Stevenson’s clothing store. She was very outgoing and had many friends. She also enjoyed being a part of the Holy Family Catholic Church Circle.

Pat enjoyed life and having fun. She loved being near the ocean, walking on the beach, going for boat rides, playing cards, and sharing funny stories. Most of all, Pat loved her family, her grandchildren and great-grandchildren. They were a very special and big part of her life. The grandkids used to take turns each week going to her house for a special "grandpa & grandma" dinner and a sleepover.

Pat was very involved in both of her grandchildren and great-grandchildren's activities too. She was always there to cheer them on, give her support and lots of big hugs.

Pat enjoyed living on her own and driving her car until she had a stroke at 92 yrs. old and was confined to a wheelchair. She then moved into the Heritage Care Center where Pat enjoyed the company of her long-term roommate, Dorothy,

Pat meant so much to everyone and was loved by so many people, including all her family and friends, and she will be deeply missed. May her memory be eternal.

To send flowers to the family in memory of Patricia R. Haensch, please visit our flower store.