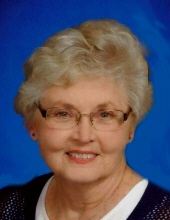 Patricia was the youngest of six children born to Earl Glen and Ilda (Oleson) Switzer of McIntire, Iowa on August 29, 1936. She attended school in McIntire and graduated in 1953. Following her graduation, she moved to Waterloo, Iowa and took a job as a secretary at the Rath Packing Company. While there she met her first husband, Robert Murphy. They were married on November 25, 1954 at the Wayne Baptist Church in McIntire. To this union two sons were born, Steven and James. The family then moved to Des Moines, Iowa where she went to work at the Bankers Trust Company. In 1967 the family moved to Mason City where her husband had taken employment at Farmer Opticians, Inc. Patricia took a secretarial position at the Bankers Life Insurance Company and was then offered a position as the Secretary to the Superintendent of Schools for Mason City. This was her proudest and most satisfying employment and one which she served for over 27 years before her retirement in 1998. Her first husband, Robert Murphy, passed away on November 21, 1981. She married William Bjerke on March 17, 1984 at Trinity Lutheran Church in Mason City. Bill died on September 6, 2018.

She was an excellent cook and loved to try out new recipes which her family enjoyed partaking in. She and Bill loved to play golf and in the winter months would travel south to find a place to play.

The family would like to thank the staff of Country Meadow Place for the kindness and care they have shown to Patricia for the past 4 years.

To send flowers to the family in memory of Patricia M. Bjerke, please visit our flower store.