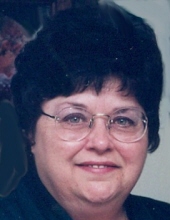 Patricia was born May 12, 1945 the daughter of Thomas and Thelma (Wright) McKibben in Mason City, Iowa. She attended Mason City Community Schools and graduated in the class of 1963.

On March 23, 1968 Patricia was united in marriage to Larry Ritter in Mason City, Iowa. To this union two daughters were born.

Over the years Patricia was employed at AC Nielsen, Northwestern States Portland Cement Company Credit Union and Armour in the office.

Patricia enjoyed socializing with family and friends and organizing family gatherings. She was very involved with planning the class of 63’s class reunions. Patricia spent hours on facebook keeping up with friends and playing games. She loved looking for the ultimate antiques, going to auctions and just going shopping. Patricia was a former member of the Eastern Star. She is a member of Trinity Lutheran Church.

Mrs. Ritter was preceded in death by her parents and husband Larry.

To send flowers to the family in memory of Patricia J. Ritter, please visit our flower store.