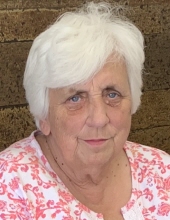 Patricia (Pat) Ann Hackbart Betts passed away on Thursday, September 2, 2021 at Mercy Hospital in Mason City, Iowa. She was born June 16, 1949 in Osage, Iowa to Melvin and Emma (Virginia) Horton Hackbart. Pat graduated from Osage High School in 1967. She met and fell in love with Kaye Betts and they were united in marriage on October 5, 1969. They were blessed with two children Robert Betts and Tonya (Betts) Bergman. In the early years of their marriage they lived in Forest City and several other small towns in Iowa due to Kaye's job with the railroad. Kaye then started working for the County and McGregors Furniture and they settled permanently in Mason City. Pat graduated from Hamilton Business College with top honors in 1982 while raising her family. Pat worked at Klipto Printing Company, Shopko from the time the Mason City store opened in 1985 until her retirement in 2016. During that time she also was a Sunday school teacher at Wesley United Methodist Church. In retirement Pat cherished her time going to her grandchildren’s many events which she was very proud of them.

Kaye and Pat treasured time with their family. They were very involved with their grandchildren Aaron, Evelyn, Avery, and Hadley. Their grandchildren were their entire world. Every Autumn until Kaye's passing in 2013 they would venture to Wisconsin to see the changing colors and stop along the way to see the views. Pat loved her family and was happiest when she was spending time with them.

Pat is preceded in death by her parents, her husband, a daughter-in-law Blenn Betts, and a brother-in-law Don DeWalle Sr and many family members on Kaye’s side.

Cards and memorials may be sent to the family in Pat Betts memorial account through Cent Credit Union in care of Tonya Bergman and Bob Betts.

To send flowers to the family in memory of Patricia A. Betts, please visit our flower store.