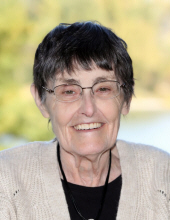 Pamela J. Vala, 73, of Clear Lake died Thursday, May 28, 2020 at Sunnybrook Assisted Living in Fairfield, Iowa surrounded by her family.

A memorial service will be held at 10:30 A.M., Friday, July 3, 2020 at Major Erickson Funeral Home, 111 North Pennsylvania Ave, Mason City, with Rev. Jim Bringman officiating. Family will greet friends an hour prior to service time on Friday. Inurnment will follow in the Riverside Cemetery, Charles City.

Pamela Jo Vala, the daughter of Milton and Eleanor (Hedlund) Pearce, was born October 21, 1946 in Charles City. She grew up in Charles City where she graduated from high school in 1964. Pam briefly attended UNI in Cedar Falls and then began working at the A&B Elevator in Charles City. On December 27, 1969 she was married to Gary Vala at the Catholic Church in Nashua, Iowa. The couple moved to Clear Lake where they raised their two children, Sheila and Kurt. She worked at Wal-Mart until her retirement in 2011.

Pam loved being a mom and grandma. She was blessed with many close friends and enjoyed playing cards, the casino, sports, laughing and visiting on her front porch.

She was preceded in death by her parents; a sister, Pat Pearce; and her former husband Gary.

To send flowers to the family in memory of Pamela J. Vala, please visit our flower store.