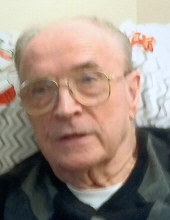 Orville H. Muth, 88, of Story City, IA and formerly of Clear Lake, IA, died Monday, September 25, 2017, at Bethany Manor in Story City. Funeral Services will be held at 10:30 AM on Thursday, September 28, 2017, at Major Erickson Funeral Home, 111 N. Pennsylvania Avenue – Mason City with Rev. Kathleen R. Moore of the First United Methodist Church officiating. Visitation will be from 4:00 PM – 6:00 PM on Wednesday, September 27, 2017, at Major Erickson Funeral Home and continue one hour prior to the service. A private family inurnment will take place at Memorial Park Cemetery.
.
Orville was born December 24, 1928, in Rockwell, IA, the son of Wilbur and Augusta (Brunstein) Muth. He graduated from Rockwell High School in 1946, and continued his education at Wartburg College. In 1948, Orville enlisted in the U.S. Army and served during the Korean War until his honorable discharge in 1951. Orville was united in marriage to Henrietta F. Long on August 10, 1952. Orville worked for Sieg Auto Parts for 37 years until his retirement in 1990. He also ran the Swan Motel, Maid Rite Shop and took care of 3 duplexes. Orville enjoyed spending time with his family. He also enjoyed golfing, traveling, remodeling, painting and genealogy. Orville was a handy man with a great sense of humor. In his younger years he played baseball and basketball. Orville was a member of the VFW and the Lions.

He was preceded in death by his parents; his wife in 2015; and brothers: Raymond Muth (in infancy) and Lyle Muth.

To send flowers to the family in memory of Orville H. Muth, please visit our flower store.