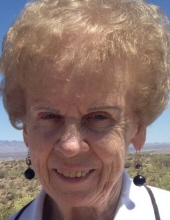 Norma Jean McEachran Swanson, 84, of Sun Lakes, Arizona, passed away, Tuesday, March 17, 2020 at the Renaissance Senior Living Facility. Graveside services will be held at 10:30 AM Saturday, July 10, 2021 at the Elmwood-St. Joseph Cemetery with Pastor Kathy Graves officiating. Norma has requested memorials (in lieu of flowers) to Hospice of the Valley, 1510 E. Flower Street, Phoenix, AZ 85014.

Norma Jean McEachran, daughter of Glen and Hilda McEachran, was born on March 16, 1936 in Mason City, Iowa. She attended country school in Portland, Iowa through 7th grade. She graduated from Nora Springs High School in 1952. Norma graduated from UNI in Cedar Falls, Iowa with a Bachelor of Arts Degree in 1956.

Norma taught high school at Lakota, Iowa from 1956-1957. She taught business courses at Nora Springs High School in 1952. Norma was a substitute teacher at Nora Springs and Central High School after that time. She owned Swanson’s Gifts while in Mason City and worked part-time in the Payne Plumbing office.

Norma was united in marriage to Larry Swanson on June 22, 1958. A daughter, Tammy, was born to this union in 1963. Norma and Larry lived in Mason City until November of 1986. At that time, they moved to Sun Lakes, Arizona.

Norma joined Intel Corporation in Chandler, Arizona as an Administrative Associate from 1988 until she retired in 2008. Her job allowed her to participate in several charity activities—which included Back to School clothing drives, United Way, Adopt a Family, LaMesita Shelter, sorting of food at United Food Bank, drives to collect books and food for the needy, and Child Spree—as well as coordinating a large department of employees.

After Norma’s retirement, she volunteered with Neighbors Who Care community organization in Sun Lakes, was active in bridge clubs, participated in Bible Study and women’s activities at King of Glory Church in Tempe, Arizona.

Norma was preceded in death by her parents, Glen, and Hilda McEachran, her husband, Larry Swanson, and her brother in-law, Bill Swanson.

To send flowers to the family in memory of Norma Jean Swanson, please visit our flower store.