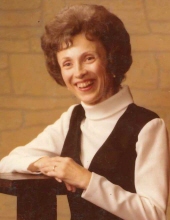 A visitation will be held one hour prior to the service time on Monday.

Interment will be held in the Sacred Heart Cemetery, Boone, Iowa.

Memorials can be directed to KCMR or St. James Lutheran Church.

Born August 8, 1929, in Boone County, Norma was the oldest of three daughters of Walter and Marie (Fibikar) Shafer. She attended country school in rural Boone, where at an early age she met her future husband, Francis R. Fitzgerald.
Norma graduated from Boone High School in 1947. Norma would tell you she was a child of the Depression. “They were hard years she would say. We think it made her a survivor. She lived 91 years, after all.
Working as a telephone operator and retail saleswoman, Norma was reacquainted with Francis when they were both employed by the Penney’s store in Boone. They married May 9, 1949.
The couple welcomed their daughters, moving to Mason City, Iowa in June of 1964; a son soon followed. Norma worked as a switchboard operator at St. Joseph Mercy Hospital in Mason City. In the late 1960’s she accepted Jesus Christ as her Lord and Savior.
Norma enjoyed Bible studies and fellowship at the First Christian Church and Mason City Covenant Church. She also enjoyed doll-making and was a member of the Mason City Doll Club. In her later years, she loved telling stories. Once she got on a roll, it was great listening to her talk about dating our Dad and double dating with her sister. She’d also talk a lot about her parents, Walt and Marie, and how hard they worked on the farm. She’d also tell stories about her parent’s large families.
On March 3, 1989, Norma’s husband Francis passed away suddenly; we are grateful to the Lord that we had our mother and grandmother for all of these years..
Our mother leaves quite a legacy. Norma is survived by three daughters, Debbie (Mick) Cahalan, Cay Folsom of Mason City and Reneé (Nick) Preftakes of Oklahoma City and son, Michael (Sherri) of Mason City; eight grandchildren, Christopher (Stacy) Cahalan of Kansas City, Missouri, Ryan Cahalan of Chicago and Andrew (Melissa) Cahalan of Marion, Rachel (Craig) Koch, Sarah (Dennis) Vaudt and Abigail (Tim) Murray, all of Mason City, Madison (Brandon) Fitzgerald-Russell of Kalamazoo, Michigan and Tony Fitzgerald of Mason City; 15 great-grandchildren and one great-great-grandchild, surviving also are two sisters Patricia Doran of Beaver, Ia. and Margaret Davis of Clearwater, FL.
Between all of us, we’ll remember and pass on all of your many wonderful family stories. Say “hi” to Dad for us.

To send flowers to the family in memory of Norma Delores Fitzgerald, please visit our flower store.