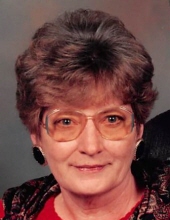 Nancy Jo Ebbers, 79 of Mason City, passed away on Wednesday, February 2, 2022 at her home. Per her wishes, she was cremated and there will be no services. Memorials may be directed to the family of Nancy Ebbers.

Nancy was born on March 6, 1942 in Mason City to parents Clyde Carroll and Clarice (Bryant) Carroll. After their divorce, Clarice married John M. Christensen August 10, 1945 when Nancy was 3. Nancy graduated from Mason City High School in 1960. On December 11, 1960, Nancy was united in marriage to John Junior Ebbers in San Diego, CA. They lived in San Diego, CA while John was in the Navy. After he got out, they moved to Seattle, WA, Denver, CO and then moved back to Mason City, IA.

Nancy was employed at Mercy Hospital, Mason City High School Cafeteria and later became a homemaker. As a retirement project, Nancy and John bought Camp at the Woods in Rock Falls on April 1, 1996, and ran the camp until 2012.

To send flowers to the family in memory of Nancy J. Ebbers, please visit our flower store.