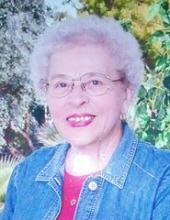 A funeral service will be held at 1 p.m. on Thursday, March 18, 2021, at Trinity Lutheran Church, 213 N Pennsylvania Ave. with Pastor Kathy Graves officiating.

The funeral service will be livestreamed on the Trinity Lutheran Church YouTube page.

Memorial contributions may be directed to the family of Myrtle Tapps or in Myrt’s memory, to organizations dear to her heart.


Myrt was born February 25th, 1924 to parents Wilhelm and Clara (Calgaard) Willand, and attended Primary School at Bristol #5 and graduated from Kensett High School in 1940. Myrt spent the first year after high school helping care for her widowed mother, and in return her brothers funded her education at Hamilton’s Business College. After completion of her medical secretary degree, she worked for Drs. Chenoweth and Fallows and later Dr. John Dixon. Myrt met and married the love of her life Raymond H. Tapps from Britt Iowa on June 16th, 1946. Ray and Myrt were avid dancers and loved to go with their friends to the Surf Ballroom for Big Band music and dancing. To this union, two daughters were born: Linda (Thomas) Als and Marilyn (Grant) Harrod. Myrt's greatest joy was spending time with her family and friends, especially so while playing a good game of Phase 10 or Dominoes. Myrt and Ray also enjoyed spending their winters in Mesa, Arizona after retirement.

Myrt was active in the community. She was Secretary and Chaplin in the VFW Women's auxiliary, post 733 and member of "Women in Medicine" group. She was a Brownie and Girl Scout leader for her two daughters as they grew up. As a member of Trinity Lutheran Church, Myrt took pride in organizing and participating in their yearly church bazaar. She crocheted prayer shawls for the hospitalized church members. Additionally, she took her love of music to local nursing homes playing piano for Rev. Kathy’s services. Myrt’s feisty spirit, fierce independence and love of life will long be remembered by so many in the community she touched.

She is survived and celebrated by many family members including: her daughter Linda Als of Mason City and her children Lori Meyering (Phil), Scott Als (Molly Bing); daughter Marilyn Harrod (Grant) of Des Moines and her children, Matthew Brandt (Annie) and Brian Brandt (Katy). Myrt is also survived by six great grandchildren and multiple nieces and nephews.

To send flowers to the family in memory of Myrtle J. Tapps, please visit our flower store.