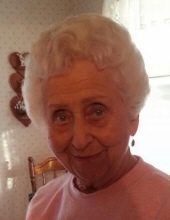 Interment will be held in Elmwood-St. Joseph Cemetery.

Memorials may be directed to the family of Mona Holt.

Mona was born in Belgium on May 10, 1926. She was the daughter of Louis and Marie Caerts. She graduated from schools in Belgium. Mona worked in a large department store in Leige, Belgium until the war began. Her family owned a café where she then worked. This is where she met her husband John, while he was serving in the military. They were united in marriage in Belgium on December 2, 1945. They moved back to live in Mason City, Iowa in April of 1946 where they spent 65 years together. To this union 2 children were born, son Robert (Bob) L. Holt and daughter, Lou Ann (Holt) Morris. Mona became a U.S. Citizen in 1948. She was employed for 5 years at the Jacob E. Decker plant. She was a member of Our Saviour’s Lutheran Church, the Happy Mixers Birthday Club and the Strike and Spare League.

Family was extremely important to her. Mona enjoyed spending time and caring for her grandchildren. They always requested her making them their favorite Mickey Mouse pancakes. She was a very active person. Many of the things she enjoyed were cooking and baking everything from scratch. She would bake each family member their special requested birthday cake. Other things include bowling, golfing, boating, playing cards with family and going to the casino to play blackjack then enjoy a lobster dinner at the Woodfire Grill.

Mona thoroughly enjoyed the little trips to Laughlin and Vegas, the Rivera Cruise, weekend trips in the motorhome and several others.

To send flowers to the family in memory of Monique "Mona" Holt, please visit our flower store.