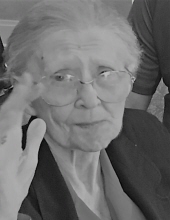 Memorial services will be held at 10 AM Thursday, July 18, 2019 at the Major Erickson Funeral Home with Pastor Dan Carlson officiating. Interment was held in the Plymouth Bohemian Cemetery, Plymouth, Iowa.

In lieu of flowers the family requests donations to the Alzheimer’s Association, Colorado Chapter, www.alz.org.

Mildred “Mil” was born September 10, 1918, the first child of James Navratil and Anna Novak. She was born on the family farm between Rock Falls and Plymouth, Iowa, where she grew up and attended the Rock Falls township school. At Rock Falls High School, Mil played on the 1935 and 1936 undefeated Women’s basketball teams and were the North Iowa Sectional champs.

After high school, Mil worked on the farm helping her mother raise the family: brother Louis, and sisters Valores “Val,” and Elenor “Kelli,” and became a Rock Falls switchboard operator.
She met her future husband Nick Dosen, from Mason City, while attending a local dance. They were married on March 24, 1940. After they married, Mil worked for J. C. Penny’s and Sears and Nick worked at the Brick and Tile Company, Coca Cola, and later the U. S. Postal Service. Mildred and Nick had two daughters Donna and Linda.

Mil and Nick could often be found fishing. They fished the Shell Rock river, or over at Clear Lake, and up in Minnesota each summer. She was very fond of family trips, traveling to California, Chicago, and Denver to see relatives. She loved flowers and planted huge flower and vegetable gardens each season. She enjoyed persuading her grandchildren with delicious foods and snacks to help maintain her yard and gardens. She treasured her family the most and had wonderful late summer family picnic feasts in her yard.

After Nick’s death in 1990, she moved out to Colorado to be with her daughters Linda and Donna. While in Colorado she made trips to California to see her sister Kelli and to Oklahoma to see sister Val. She lived at Heather Gardens in Denver spending her days quilting, painting landscapes with watercolors, playing bridge, attending Church, and taking trips to the mountains.

She is preceded in death by her brother Louis (1965) husband Nick (1990), and daughters Linda Hovenga (1995) and Donna Gorman (2014). She is survived by her Sisters Kelli “Elenor” Navratil Young and Valores “Val” Brock, nephew Bob Navratil, Sons-in-Law Larry Hovenga and Jay Gorman, her grand and great-grandchildren in Colorado, and nieces and nephews in Oklahoma and California.

To send flowers to the family in memory of Mildred M. Dosen, please visit our flower store.