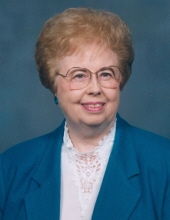 A visitation will take place one hour prior to the service time.

Mildred Jean Milligan was born January 29, 1927, at Park Hospital, Mason City, to Lester and Vera (Merritt) Milligan. She graduated from Mason City High School, North Iowa Area Community College and Hamilton Business College.
Miss Milligan was employed in the sales department of AMPI from 1948-1951, then State Brand Creameries. She was office manager for Marshall & Swift Furs, 1951-1963, an administrative secretary for the Chamber of Commerce, an office supervisor for Industrial Credit, Minneapolis, 1965-1967. She worked for the Federal Office of Economic Opportunity from 1967-1970, when she was hired by the Iowa Dept. of Human Service District Office, retiring as Administrative Officer in 1992.
Miss Milligan was active in the WATANYE women’s service club, North Iowa Camera Club, Mason City Woman’s Club, Mason City Foundation, Pioneer Museum, MacNider Art Museum, Rake and Hoe Garden Club where she enjoyed exchange of perennials, and P.E.O. Chapter GN. She especially enjoyed serving on the NIACC Alumni Assoc. Board and volunteering in The Music Man Square gift shop.
Active in First United Methodist Church, she served on numerous commissions and as a member of the church council. She taught 3rd grade Sunday school for 15 years, was a past president of United Methodist Women, many years as a circle leader and played piano for Bible study groups. In 1980 she became a charter member of Jubilee Ringers, the church’s handbell choir.
When Milligan retired in 1992 she was asked to edit a semi-annual newsletter for her Mohawk classmates of 1945 which she titled “Tracks from the Teepee.” After the 50th class reunion, she set up a daily Internet “Cheers” exchange between classmates and friends.
Known for her interest in horses, in 1946 Miss Milligan became a riding instructor when she was a counselor at the Girl Scout camp south of Ventura. She was the first woman president of the Iowa Saddle Clubs Association. She served 18 years as secretary of the Mason City Trail Riders, during which time the membership grew to exceed 100 families. Milligan was instrumental in developing the club’s mounted drill team which performed at area events. With a small group of other outdoor enthusiasts, she worked to clear a horse trail north of Mason City which is now the Lime Creek hiking trail.
As a part of the local Adult Education Program in the 1960’s, Miss Milligan conducted classes on horse ownership at the YWCA, teaching riding at the Harry Homrig stables. She moved American saddle bred horses for Vern Sulteen sales, Clear Lake, and rode her own registered Morrocan, Palamino, Arabian and Quarter horse breeds over a span of 25 years. Trail riding in distant areas with friends was her favorite sports activity. In later years she was a fan of the Minnesota Vikings, Iowa Hawkeyes and enjoyed most TV sports.
In 1977 Miss Milligan designed and constructed the second set of condominiums to be built in Mason City, a fourplex named Fairfax, located at 422 South Tennessee Place.
She was preceded in death by her father in 1977, her mother in 1984 and her brother, Merritt, in 1991, leaving no survivors.
To send flowers or a remembrance gift to the friends of Mildred Jean Milligan, please visit our Tribute Store.

To send flowers to the family in memory of Mildred Jean Milligan , please visit our flower store.