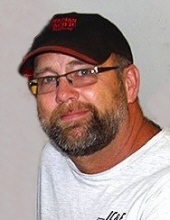 Michael J. “Buzz” Sberal, 57, of Nora Springs, IA, passed away peacefully in his sleep at home on Tuesday, October 17, 2017. Memorial services will be held at 10:30 A.M. on Saturday, October 21, 2017, at Major Erickson Funeral Home, 111 N. Pennsylvania Avenue, with Rev. Ross Erickson officiating. There will be a gathering of family and friends from 5:00 PM - 7:00 PM on Friday, October 20, 2017, at Major Erickson Funeral Home. Inurnment will take place in Memorial Park Cemetery. Military honors will be conducted by the Mason City Veterans Association. In lieu of flowers, memorials may be directed to the Michael Sberal memorial fund in care of the family.

Michael was born August 28, 1960, in Mason City, the son of Joseph J. and Joanne (Wallace) Sberal. He graduated from Mason City High School in 1978. In 1982, Buzz enlisted in the U.S. Army and proudly served his country until his honorable discharge in 1985. Over the years, Buzz worked for Henkel Construction, Overhead Door, Leisinger Construction, and for the last 18 years, Canadian Pacific Railroad. Buzz enjoyed spending time with his children. He also enjoyed fishing, hunting and taking care of his cat “Cha Cha”. He was a member of the NRA.

He was preceded in death by his father.

To send flowers to the family in memory of Michael "Buzz" J. Sberal, please visit our flower store.