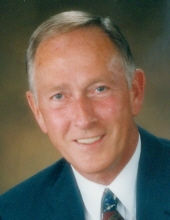 A memorial service will be held on Wednesday, December 12, 2018, at 10:30 AM at Trinity Lutheran Church, 213 N Pennsylvania, with Pastor Kathy Graves officiating.

A gathering will take place one hour prior to the service time on Wednesday. Inurnment will be in Elmwood-St. Joseph Cemetery.

Memorials can be made out to Trinity Lutheran Church or The American Cancer Society.

Merwyn was born in Pokegama Township, MN on September 3, 1939 to Merrol and Luella Larson. He had one brother, Ron Larson. To his mom and dad he was always Merwyn, but to most others he was Mer, Lars, Dad, or Papa. He was baptized at Zion Lutheran Church in Churches Ferry, ND by his grandfather, Rev. Anton Larson on July 14, 1940. He was confirmed at Calvary Lutheran Church in Mora, MN on May 24, 1953. He was a follower of Jesus Christ his entire life.
He graduated from Mora High School in 1957, received his B.A. from Gustavus Adolphus College in 1961, earned his M.D. from St. Louis University School of Medicine in 1967, and completed his surgical internship at Marquette University School of Medicine in 1968.
Between 1968 and 1970, he served his country in Vietnam as a Captain in the U.S. Army. His only objective was to save the lives of those who were on the front lines in graver danger than himself.
Lars claims that the smartest thing he ever did was to marry his soul mate, Beverly, in 1971. His greatest joy was watching his two children grow into responsible, God-fearing adults.
Lars’ medical career was almost entirely spent at Mercy Medical Center in North Iowa. In his words, “It was truly a joy and a privilege to work at an institution with such high-quality administrators, physicians, nurses, and other hospital personnel”.
In 1995, Lars’ retirement years were kicked off by a massive cardiac arrest, but thanks to his best friends, he had another 23 years to enjoy traveling, camping, golf, and fishing. In his role as Papa Mer, he especially enjoyed spending time with family and his very special grandchildren. It was also great fun to enjoy their lake side cabin in Minnesota.
Merwyn was survived by his wife: Beverly; children: Aaron (Mary Beth) Larson, Sarah (John) McGarvey; grandchildren: Ellianna Larson, Cierra Larson, Savannah Larson, Shon Larson, Charlie McGarvey, Orla McGarvey; Ronald (JoAnna) Larson; numerous nieces and nephews.
He was preceded in death by his parents.

To send flowers to the family in memory of Merwyn Eugene Larson, please visit our flower store.