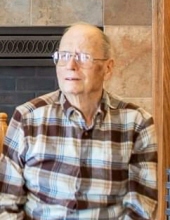 Inurnment will be at Elmwood-St. Joseph Cemetery. Visitation will be held one hour prior to service time Wednesday.

Memorials may be directed to Zion Lutheran Church.

Merle Ralph Ellingson was born on June 25, 1932 to parents Clarence and Myrtle (Miller) Ellingson. He was raised in St. James, Minnesota, and later in life moved to Mason City with the rest of his family in 1945. He then went on to graduate from Mason City High School.

Merle spent 16 months in Korea; he was honorably discharged in 1954.

Merle married the love of his life, Hazel Bridgeford on February 3, 1953 in Mason City. To this union, three children were born: David, Mark, and Julie.

Merle worked at the Park Inn Hotel prior to working as a clerk for the United States Postal Service for 26 years until his retirement in 1996. He was a lifetime member of the Mason City VFW and an active member of Zion Lutheran Church in Clear Lake.

Merle was an avid Minnesota Gopher fan. He loved to go bowling, traveling, and most importantly, spending time with his family. Merle was very family oriented and would spend any chance he got with his children, grandchildren, and great grandchildren. Merle also cared deeply for the many dogs that he had over the years.

Merle is preceded in death by his parents Myrtle Lamb and Clarence Ellingson; and brother, Claire Ellingson.

To send flowers to the family in memory of Merle R. Ellingson, please visit our flower store.