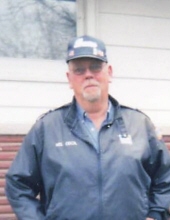 A private graveside service will be held in Elmwood-St. Joseph Cemetery.

Memorials may be directed to the family of Melvin Cecil.

Melvin was born on June 17, 1941, to parents Lafe and Etta (Myers) Cecil in Keokuk, Iowa. In childhood, Melvin lived in Athens, MO, where he attended Athens High School.

Melvin was employed at Bennett Motor Express as a over-the-road delivery driver for many years until his retirement.

In his free time, Melvin enjoyed fishing, and traveling. He hated sitting still; he was always out and about doing something! Melvin was known by his friends and family as an all-around great guy. He was always around to lend a helping hand to ones that needed it, and he loved spending time with his kids, grandkids, and his very special friend, Phyllis. Melvin was an amazing father, grandfather and friend and he will be deeply missed by those who knew him and loved him. His memory will be cherished forever.

Melvin was preceded in death by his parents, Lafe and Etta Cecil; and his brothers and sisters.

To send flowers to the family in memory of Melvin J. Cecil , please visit our flower store.