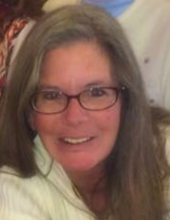 A gathering of family and friends will be held one hour prior to the service on Friday. Inurnment will be held at a later date. Memorials may be directed to the family of Melinda Kay Brunner.

Melinda Kay Brunner was born on March 29, 1960 in Mason City to parents Vern “Rusty” and Terry (Torgeson) Clausen. After graduating from Mason City High School, she went on to work for Ross Caniglia Jewelers, Midwest Plastics and Good Shepherd Nursing Home. Mindy was united in marriage to Larry Miller in December of 1978, in this union the couple had two children Aaron and Shawna. In later years Mindy was united in marriage to Rex Brunner until his passing in 2003.

Mindy had many joys in life, she loved her plants, making jewelry, taking trips, cooking and drawing. She enjoyed the outdoors where she spent time sitting in the sun, fishing, having bonfires while listening to music. She also had a love for animals, and loved to feed the squirrels and the birds. For those who knew Mindy she will be remembered as a kind-hearted person.

She was preceded in death by her father: Vern “Rusty” Clausen; husband: Rex Brunner and son Aaron Miller.

To send flowers to the family in memory of Melinda Kay Brunner, please visit our flower store.